When creating a snapshot from the VM console, you are presented with the option to “Quiesce” the guest file system.

That’s it for the configuration, the checkbox you see below. 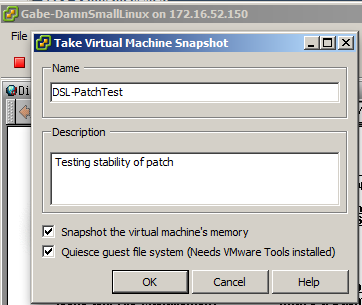 ◎ Hold up; What does Quiesce actually mean (I have not clue) ?

At this point I have to fess up – being a true ESL individual – I’ve never heard the word “Quiesce” before, so the option means nothing to me.  Had to do a little bit of digging.   Here’s what I found:

To render quiescent, i.e. temporarily inactive or disabled. For example to quiesce a device (such as a digital modem). It is also a system command in MAX TNT software which is used to “Temporarily disable a modem or DS0 channel”.

OK – so at this point I get where this is headed.  I’m satisfied with my understanding of the word 😀

I checked the vSphere help file.  Lo and behold! I’m greeted by a perfectly clear explanation:

“Select the Quiesce guest file system (Needs VMware Tools installed) check box to pause running processes on the guest operating system so that file system contents are in a known consistent state when the snapshot is taken. This applies only to virtual machines that are powered on.”

But OCD kicked in.  I had to know…

◎ What else is there to know about Quiescing??  (Tell me more)

“Quiesce: If the <quiesce> flag is 1 or true, and the virtual machine is powered on when the snapshot is taken, VMware Tools is used to quiesce the file system in the virtual machine. Quiescing a file system is a process of bringing the on-disk data of a physical or virtual computer into a state suitable for backups. This process might include such operations as flushing dirty buffers from the operating systems in-memory cache to disk, or other higher-level application-specific tasks.

Note:Quiescing indicates pausing or altering the state of running processes on a computer, particularly those that might modify information stored on disk during a backup, to guarantee a consistent and usable backup.”

Note: Depending on the guest operating system, the quiescing operation can be done by the sync driver, the vmsync module, or Microsoft’s Volume Shadow Copy (VSS) service

VMware products require file systems within a guest operating system to be quiesced prior to a snapshot operation for the purposes of backup and data integrity. VMware products which use quiesced snapshots include, but are not limited to, VMware Consolidated Backup and VMware Data Recovery.

Virtual machine generating heavy I/O workload may encounter issues when quiescing prior to a snapshot operation. These issues may be related to the component that does the quiescing or the custom quiescing scripts as described in the Virtual Machine Backup Guide.

Services which have been known to generate heavy I/O workload include, but are not limited to, Exchange, Active Directory, LDAP, and MS-SQL.

The quiescing operation is done by an optional VMware Tools component called the SYNC driver.

A guest operating system may appear to be unresponsive when there is a conflict between the SYNC driver and services generating heavy I/O. If installed, the SYNC driver holds incoming I/O writes while it flushes all dirty data to a disk, thus making file systems consistent. Under heavy loads, the delay in I/O can become too long, which affects many time-sensitive applications, including the services which generate the heavy I/O (such as an Exchange Server). If writes issued by these services get delayed for too long, the service may stop and issues error messages.

To avoid this issue, disable the SYNC driver or stop the service generating heavy I/O before taking a snapshot.

Note: The sync driver is only required for legacy versions of Windows such as Windows XP and Windows 2000 which do not include the Microsoft VSS service. Updated versions of VMware Tools will automatically uninstall the SYNC driver.

Disabling the SYNC driver allows you to keep the heavy I/O services on-line, but results in snapshots being only crash-consistent.

To disable the VCB SYNC driver:

Use the following pre-freeze and post-thaw scripts to take the service generating heavy I/O offline for approximately 60 seconds and then restart it again after the snapshot is taken. This approach leaves the service inactive, but keeps the SYNC driver enabled while the snapshot is taken, ensuring application consistency. Using this method, you create the quiesced snapshot of guest operating system.
This example shuts down Exchange Services prior to a quiescing operation:

And that’s all the time I have right now – I hope this has been informative.